A candlestick chart is a style of bar-chart used primarily to describe price movements of a security, derivative, or currency over time.

It is a combination of a line-chart and a bar-chart, in that each bar represents the range of price movement over a given time interval. It is most often used in technical analysis of equity and currency price patterns.

Candlestick charts are thought to have been developed in the 18th century by Munehisa Homma, Japanese rice trader of financial instruments. They were introduced to the Western world by Steve Nison in his book, Japanese Candlestick Charting Techniques.

In Beyond Candlesticks, Nison says, "However, based on my research, it is unlikely that Homma used candle charts. As will be seen later, when I discuss the evolution of the candle charts, it was more likely that candle charts were developed in the early part of the Meiji period in Japan (in the late 1800s)." 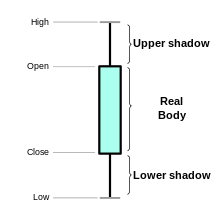 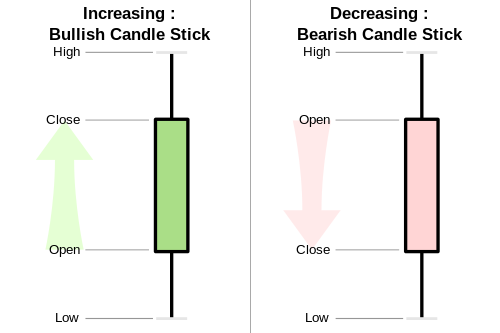 In trading, the trend of the candle chart is critical and often enlighten with colors. Candlestick charts are a visual aid for decision making in stock, foreign exchange, commodity, and option trading. For example, when the bar is white and high relative to other time periods, it means buyers are very bullish. The opposite is true for a black bar.

Marubozu is the name of Japanese candlesticks formation used in technical analysis to indicate a stock has traded strongly in one direction throughout the session and closed at its high or low price of the day. A marubozu candle is represented only by a body; it has no wicks or shadows extending from the top or bottom of the candle. A white marubozu candle has a long white body and is formed when the open equals the low and the close equals the high.

The white marubozu candle indicates that buyers controlled the price of the stock from the opening bell to the close of the day, and is considered very bullish.

Spinning top is a Japanese candlesticks pattern with a short body found in the middle of two long wicks. A spinning top is indicative of a situation where neither the buyers nor the sellers have won for that time period, as the market has closed relatively unchanged from where it opened; the market is indecisive regarding its trend. The upper and lower long wicks, however, tell us that both the buyers and the sellers had the upper hand at some point during the time period the candle represents. When a spinning top forms after a run up or run down in the market, it can be an indication of a pending reversal, as the indecision in the market is representative of the buyers losing momentum when this occurs after an uptrend and the sellers losing momentum after a downtrend.

A hammer is a type of bullish reversal candlestick pattern, made up of just one candle, found in price charts of financial assets. The candle looks like a hammer, as it has a long lower wick and a short body at the top of the candlestick with little or no upper wick. In order for a candle to be a valid hammer most traders say the lower wick must be two times greater than the size of the body portion of the candle, and the body of the candle must be at the upper end of the trading range.

When you see the hammer form in a downtrend this is a sign of a potential reversal in the market as the long lower wick represents a period of trading where the sellers were initially in control but the buyers were able to reverse that control and drive prices back up to close near the high for the day, thus the short body at the top of the candle.

After seeing this chart pattern form in the market most traders will wait for the next period to open higher than the close of the previous period to confirm that the buyers are actually in control.

Two additional things that traders will look for to place more significance on the pattern are a long lower wick and an increase in volume for the time period that formed the hammer.

The pattern is made up of a candle with a small lower body and a long upper wick which is at least two times as large as the short lower body. The body of the candle should be at the low end of the trading range and there should be little or no lower wick in the candle.

The long upper wick of the candlestick pattern indicates that the buyers drove prices up at some point during the period in which the candle was formed but encountered selling pressure which drove prices back down for the period to close near to where they opened. As this occurred in an uptrend the selling pressure is seen as a potential reversal sign. When encountering the Inverted Hammer traders will look for a higher open on the next period before considering the pattern confirmed and potentially including it in their trading strategy.

The shooting star is a type of bearish reversal pattern. The Shooting Star looks exactly the same as the Inverted hammer, but instead of being found in a downtrend it is found in an uptrend and thus has different implications. Like the Inverted hammer it is made up of a candle with a small lower body, little or no lower wick, and a long upper wick that is at least two times the size of the lower body.

The long upper wick of the candlestick pattern indicates that the buyers drove prices up at some point during the period in which the candle was formed but encountered selling pressure which drove prices back down for the period to close near to where they opened. As this occurred in an uptrend the selling pressure is seen as a potential reversal sign. When encountering this pattern traders will look for a lower open on the next period before considering the pattern valid and potentially including it in their trading strategy.

As with the Inverted hammer most traders will see a longer wick as a sign of a greater potential reversal and like to see an increase in volume on the day the Shooting Star forms.

The doji represents indecision in the market. A doji is not as significant if the market is not clearly trending, as non-trending markets are inherently indicative of indecision. If the doji forms in an uptrend or downtrend, this is normally seen as significant, as it is a signal that the buyers are losing conviction when formed in an uptrend and a signal that sellers are losing conviction if seen in a downtrend.

There are several Doji types can be recognized (listed in the same sequence as shown on the image): 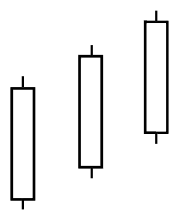 It unfolds across three trading sessions and suggests a strong price reversal from a bear market to a bull market. The pattern consists of three long candlesticks that trend upward like a staircase; each should open above the previous day's open, ideally in the middle price range of that previous day. Each candlestick should also close progressively upward to establish a new near-term high. 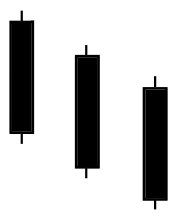 Three black crows is a term used by stock market analysts to describe a market downturn. It unfolds across three trading sessions, and consists of three long candlesticks that trend downward like a staircase. Each candle should open below the previous day's open, ideally in the middle price range of that previous day. Each candlestick should also close progressively downward to establish a new near-term low. The pattern indicates a strong price reversal from a bull market to a bear market. 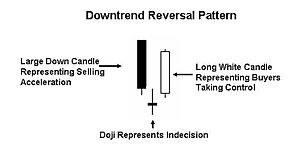 The pattern is made up of three candles: normally a long bearish candle, followed by a short bullish or bearish doji, which is then followed by a long bullish candle. In order to have a valid Morning Star formation, most traders will look for the top of the third candle to be at least halfway up the body of the first candle in the pattern. Black candles indicate falling prices, and white candles indicate rising prices.

When found in a downtrend, this pattern can be an indication that a reversal in the price trend is going to take place. What the pattern represents from a supply and demand point of view is a lot of selling in the period which forms the first black candle; then, a period of lower trading but with a reduced range, which indicates indecision in the market; this forms the second candle. This is followed by a large white candle, representing buyers taking control of the market. As the Morning Star is a three-candle pattern, traders oftentimes will not wait for confirmation from a fourth candle before buying the stock. High volumes on the third trading day confirm the pattern. Traders will look at the size of the candles for an indication of the size of the potential reversal. The larger the white and black candle, and the higher the white candle moves in relation to the black candle, the larger the potential reversal.