Treasury yields don't just influence how much the government pays to borrow and how much investors earn by investing in this debt, they also influence the interest rates that individuals and businesses pay to borrow money to buy real estate, vehicles, and equipment. Treasury yields also tell us how investors feel about the economy. The higher the yields on 10-, 20- and 30-year Treasuries, the better the economic outlook.

A yield curve is a line that plots the interest rates, at a set point in time, of bonds having equal credit quality but differing maturity dates. The most frequently reported yield curve compares the three-month, two-year, five-year and 30-year U.S. Treasury debt. This yield curve is used as a benchmark for other debt in the market, such as mortgage rates or bank lending rates, and it is also used to predict changes in economic output and growth.

The shape of the yield curve gives an idea of future interest rate changes and economic activity. There are three main types of yield curve shapes: normal, inverted and flat (or humped). A normal yield curve is one in which longer maturity bonds have a higher yield compared to shorter-term bonds due to the risks associated with time. An inverted yield curve is one in which the shorter-term yields are higher than the longer-term yields, which can be a sign of upcoming recession. In a flat or humped yield curve, the shorter- and longer-term yields are very close to each other, which is also a predictor of an economic transition.

As Mr. Fisher explains in his book "The only Three Questions That Still Count":

Historically, a steep yield curve suggest an environment in which financial institutions can lend profitably, and lending is an important driver of future economic activity. However, an inverted yield curve creates a disincentive for banks to lend, thereby reducing liquidity and it's a fairly reliable predictor of recession.

Treasury Yield Curve is not drastically changing overnight, therefore it is easy to think that if it is normal today it will remain normal tomorrow and day after tomorrow. Below is a chart with 12 Treasury Yield charts taken in January from year 2000 to 2018. 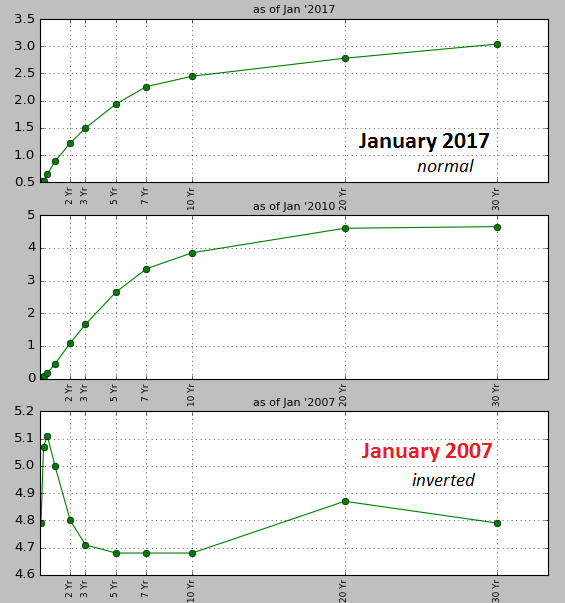 Note that most recent charts in 2018 and especially in January 2017 (two charts in the top left corner) look normal and reasonably healthy. But it was not always like that. Want to see an inverted curve example? Take a look to the January 2007 in a middle of the image. Note that it was followed by a financial crisis and a bear market in 2008.

But whether an inverted yield curve causes a bear market or not depends on whether the related bad news is priced into the market. As Mr. Fisher continues in his book: